Skip to Recipe
I absolutely LOVE chai tea, so we created these Coconut Chai Keto Fat Bombs with No Sweetener. Where we live, we have long winters and strong winds throughout most of the year. I mean, it doesn’t snow here but we come from an extremely hot and humid climate in a more northern part of Australia than where we live now and the adjustment has been hard.

Anyway, with the strong winds and cold weather, there is nothing better than escaping the cold by visiting our local coffee shop and ordering a delicious mug of almond milk chai tea. With hints of star anise, cardamom, cinnamon, cloves and sometimes extra ginger, it is so full of creamy delicious flavour and warms up your body quickly when it’s really cold outside.

Be careful though as many cafes use awful tasting chai teabags or even the chai syrup that is absolutely full of sugar and artificial nasties. You need freshly brewed real chai tea in either almond or another nut milk. Bring your own natural sweetener if you like things sweet as many cafes serve this with honey, sugar or artificial sweetener. I chai and I chai but I just can’t get off the spices 😜. And, another bad joke from Tinee. Sorry guys.

Apart from the delicious creamy flavour and the warmth found in a large mug of chai, the spices you consume actually have positive health benefits. Cinnamon, used in recipes dating back to ancient Egypt, an expensive and rare spice that was gifted to kings, helps to regulate blood sugar. Cinnamon derives from the inner bark of a Cinnamomum tree and has long been known for its ability to make cells more responsive to insulin. For those of you with diabetes, metabolic illnesses like PCOS (Polycystic Ovarian Syndrome), or with insulin resistance, this is the spice for you.

Cinnamon is also packed full of polyphenols, very powerful antioxidants, that help to repair damage caused by free radicals within the body. Among so many other health benefits, cinnamon may help to reduce the risk of heart disease, cancer, Parkinson’s disease, dementia and is an anti-inflammatory.

We use cinnamon in so many of our recipes, savoury and sweet. It has an amazing flavour and kind of zing to it. However, our favourite way to consume it is in our Keto BulletProof Chai Tea, or in our Coconut Chai Keto Fat Bombs. Oh, and if you’ve never tried chai, just chai it, you’ll like it!

Just like cinnamon, ginger also has amazing health benefits. Ginger has been known to help with various causes of nausea such as morning sickness and nausea caused by the side effects of chemotherapy. It is another spice that has anti-inflammatory properties and may even help reduce the pain from various forms of arthritis.

It may help to prevent diabetes and heart disease too, as it seems to be able to drastically reduce blood sugar levels in the body. Plus, it is super tasty in savoury and sweet dishes. We love using ginger in our Crazy Simple Keto Garlic Greens just to spice things up. Sometimes, if we have a cold or flu, it helps warm us up when we add it to our herbal teas. Goes particularly well in lemon green tea.

If you don’t feel like making up your own chai mix, we really like this delicious organic chai one. Perfect for your own Coconut Chai Keto Fat Bombs with No Sweetener. 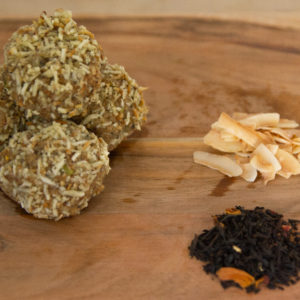 You would swear that these delicious nutrient-packed keto fat bombs had sweetener in them but they don't. To up your fat macros for the day, try one of these keto fat bombs with no sweetener with a hot cup of coffee or a keto chai tea. They're also an excellent energy boost for when you have 3pm exhaustion.
4 from 1 vote
Print Pin Rate
Course: Fat Bomb
Cuisine: Australian
Keyword: Coconut Chai Keto Fat Bombs with No Sweetener
Net Carbs: 1.1g
Prep Time: 15 minutes
Cook Time: 10 minutes
Refrigeration: 1 hour
Total Time: 25 minutes
Servings: 10 Serves
Calories: 153kcal
Author: Bettina from CrazySimpleKeto.com

Ground Chai Tea: For this, I had a bag of organic chai tea that I use to brew a delicious keto chai tea and I put what I need into a nutri-bullet and processed it until it became a fine powder. You can also make up your own chai tea blend using the common spices found in chai but you can add in how much of each one you like and less of the ones you don't. I like a little less cloves than the premixed bag I buy so I sometimes make my own blend. Optional: You could add sweetener to this if you like by just adding erythritol or powdered stevia to the external coconut chai blend.
Nutrition Facts
Coconut Chai Keto Fat Bombs with No Sweetener
Amount Per Serving (1 Ball)
Calories 153 Calories from Fat 141
% Daily Value*
Fat 15.7g24%
Carbohydrates 2.3g1%
Protein 1.3g3%
* Percent Daily Values are based on a 2000 calorie diet.
Tried this recipe?Mention @CrazySimpleKeto or tag #crazysimpleketo!

SAVE THESE COCONUT CHAI
KETO FAT BOMBS WITH NO SWEETENER
NOW TO PINTEREST!