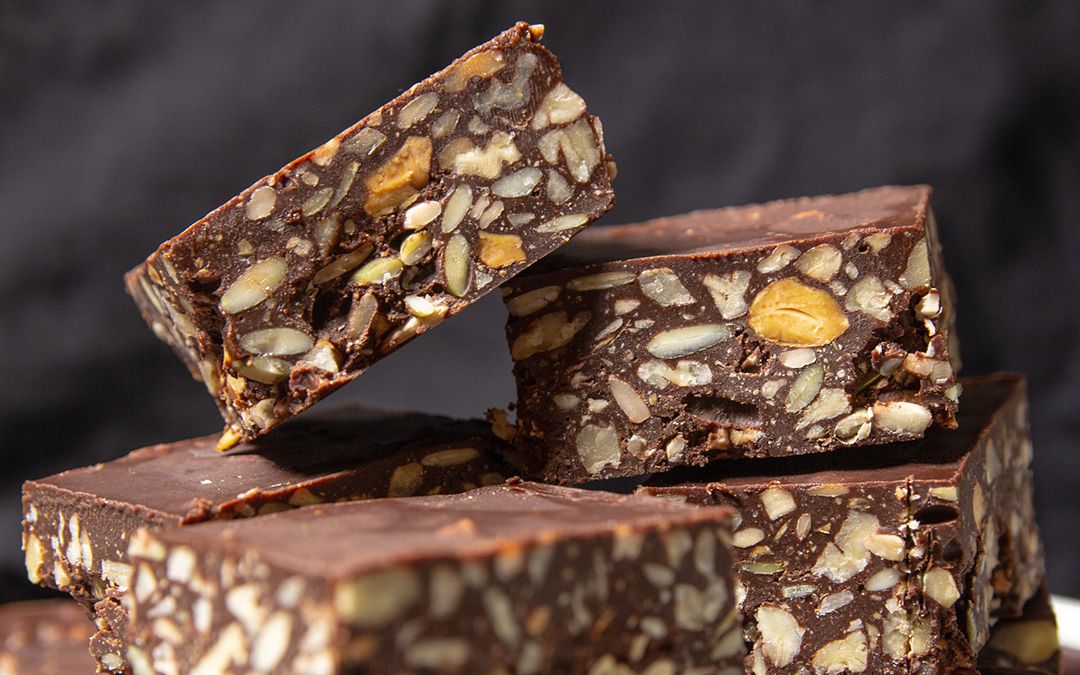 Skip to Recipe
If you’re a fan of chocolate, especially chocolate with nuts in it, these Keto Chocolate Nut Bars are the recipe for you.

When we first went keto, I craved chocolate more than anything else.

Before going keto I was pretty much eating a block of premium milk chocolate every other day and when we started keto I went completely cold turkey.

I had to because I have absolutely no self-control when it comes to chocolate. In the meantime, I have been substituting and fulfilling my craving using chocolate-based desserts.

I hadn’t found anything as good as this recipe since we started keto. These are NOT Fat Bombs

Now, I have to warn you that this is not a fat bomb. It is a dessert and contains a decent amount of carbs.

In saying that, it is nutrient dense because of the nuts and seeds and one piece definitely satisfies the craving for both chocolate and a sweet decadent snack or dessert.

The first time I made these, I used cashew and almond nut butter (homemade) which increased the carbohydrate amount significantly.

From then on I used pure almond butter instead which reduced the number of carbohydrates without changing the flavour or texture of these bars.

Stick with nuts like almonds, walnuts, pecans and some sunflower and pumpkin (pepita) seeds.

You could definitely add coconut too but it would add to the carb count.

For this recipe I like to use the Lindt 90% dark chocolate which also increases the carb count.

I would prefer to use a lower carbohydrate stevia-sweetened chocolate like Lily’s choc chips or something similar, but they’re very hard to come by in Australia unless you order from the US online.

Ingredients vary so widely between brands so make sure, whatever you use, that you count the macros based on what brands you have. 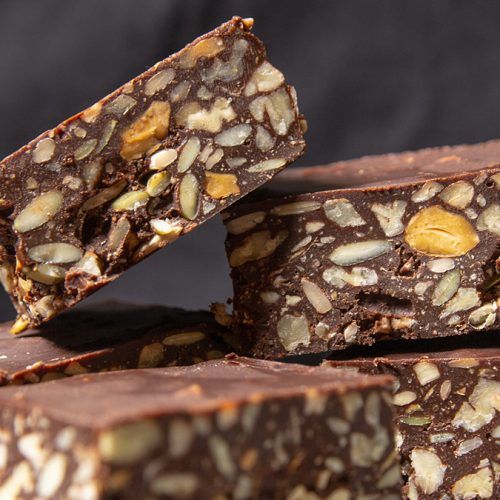 SAVE THIS
KETO CHOCOLATE NUT BARS
NOW TO PINTEREST! We make a big slice sized amount and then cut it up into squares but you could certainly pour the mixture into different molds or small loaf bar type pans to make them premade portion sizes.

Also, you could easily make them thinner like the thickness of a chocolate bar thereby making double the amount but smaller portion sizes.

The portions we’ve made here are twice the size you really need to curb your craving.